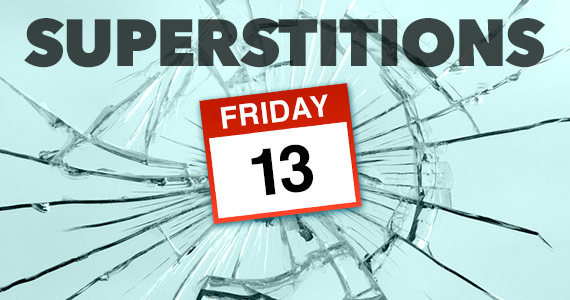 Do you believe that bad luck comes in 3’s? While in 2015, Friday the 13th occurs 3 times in this calendar year. The first being February 13, then March 13 and now finally on November 13. So whether you are freaked out about strange occurrences and just want to hide under a blanket for the day, or you continue about your life care-free, the last Friday the 13th occurs this month. There are plenty of superstitions out there, that most people are aware of whether they believe in them or not.

Some people jump at the sight of black cats because of the old superstition about witches taking on the form of domestic animals like cats.

12. Don’t walk under the ladder

If you think about this one, it’s not all the silly. Walking under a ladder could actually be dangerous. This superstition comes from a popular theory that the since the ladder is leaning against a wall it form a triangle and breaking this “Holy Trinity” is blasphemous.

My mother used to tell me that opening an umbrella inside would make it rain outside. Let’s face it though, opening one of these inside could be dangerous because you could poke someone’s eye out.

Isn’t always finding money good luck? Don’t forget to share the wealth if you hit it big on the sidewalk.

Usually a groan from an expert who just lost a game to a novice. Beginner’s Luck is believed to be a statistical fluke that newbies are more likely to win when they try out a sport, game or activity for the first time. Or could it be that they are just less stressed about it?

8. A rabbit’s foot will bring you luck

Don’t go jumping Tumper anytime soon. Ancient talismans and amulets are a time-honored way of fending off evil. From garlic to protect against vampires to the Eye of Horus, there are many ways people protect themselves by spiritual entities.

If two things have gone wrong, are you going to start to look for a third bit of bad luck to complete the set. Why not change your luck and look on the positive?

Do you have chills yet? Sometimes people seeing three 6’s in a row will cause them to feel uneasy. If you look back to the Bible, in the Book of Revelation, 666 is given as the number of the ‘beast’ and is often interpreted as the mark of Satan.

Did you just jinx yourself? Knock on wood. This verbal talisman is designed to ward off bad luck as you tempt fate.

You don’t want 7 years of bad luck, do you? Be careful when you’re moving that mirror, because you could find yourself in a bad luck situation. This superstition comes from the belief that mirrors hold bits of your soul.

3. Make a Wish on a Wishbone

With Thanksgiving coming up, do you save the wishbone to snap later for good luck?

You know you’ve done it! Crossed on finger over the other or shouted Fingers Crossed when you are hoping for a little luck. Has it ever worked?

Are you worried about a crazed killer in a hockey mask because of the day of the week? If you aren’t scared of Friday the 13th then you should be scared of the word used to describe people who are. Friggatriskaidekaphobics. Say that 3 times fast! According to Christian tradition Friday is considered an unlucky day because Jesus died on a Friday and 13 has a long history as an unlucky number.

Happy Friday the 13th Everyone!