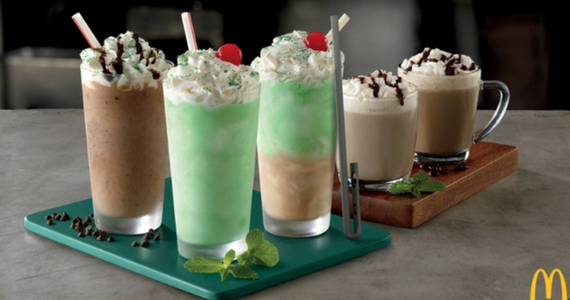 One of these requires a very sipecial straw. Why won’t a normal straw suffice?

The Chocolate Shamrock Shake is layered! There’s a layer of chocolate underneath the classic Shamrock Shake. McDonald’s was so concerned that you get the utmost out of this new flavor, they hired 2 engineering firms to create the siperb STRAW (Suction Tube for Reverse Axial Withdrawal).

The straw is designed to deliver the perfect ratio of chocolate and shamrock flavors in every sip. “From a physics perspective, it’s actually quite difficult to deliver a proportional amount of both chocolate and mint flavors with each sip. But that’s exactly what we did. It’s a marvel of fluid dynamics. Thanks Fibonacci sequence.” says Seth Newberg of NK Labs in a news release.

Fancy or crazy? What do you think?