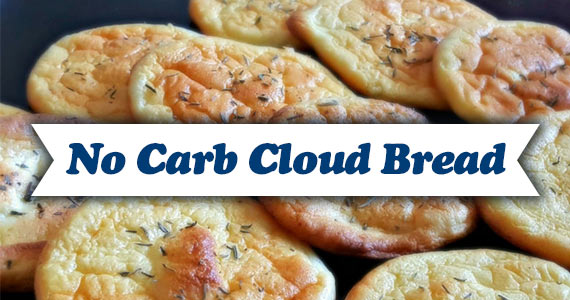 Like Oprah, I can’t get enough of the stuff! But I know that too many carbs are not good for me, which is why I love this Cloud Bread! It has the taste of bread, and definitely satisfies like bread, but it has ZERO carbs! Nope, it’s not magic. You can use this bread as hamburger buns, sandwich bread, or even toast! (YES – you can toast this bread!)Try a slice of tomato and melted mozzarella on top or with a piece of smoked salmon and cream cheese. Yum!

How to:
Preheat oven to 300 degrees
Separate the eggs, there must be no yolk in the white
In one bowl, mix together the egg yolks, cream cheese and (if you’re using it) honey until smooth
In the second bowl add 1/4 teaspoon of baking powder (or cream of tartar if you prefer) to the whites and beat the whites on high speed until they are fluffy, form a nice peaks and hold their peaks. Beat the egg whites until like a whipped cream consistency. It should look something like this: Slowly fold the egg yolk mixture into the egg whites and mix carefully, you don’t want to break the fluffiness of the egg whites too much
Do this as quickly as possible or the mixture may start melting – Spoon the mixture into 10-12 even rounds on the baking sheet, sprinkle with rosemary or your favorite spices and put it in the oven
Bake for 17-20 minutes on the middle rack. Then broil for 1 minute and watch it until they become nice and golden brown. At this point make sure you watch them so they don’t burn
Remove from the oven and let cool and enjoy!